What you don’t know about auto-association could be completely ruining your campaign influence reports in Salesforce.

Let that sink in.

Now that I have your attention, let’s talk about this auto-association thing.

I spent many years in marketing and, I have to be honest, the term “auto-association” was never uttered at my company. As a marketer, I was relying on our Salesforce Admin to ensure that Salesforce magically spit out the correct information on all my campaign influence reports. But were they accurate?

Auto-association is key to ensuring that your campaign influence reports are attributing opportunities to the campaigns that truly had influence. It does this by limiting the time that a campaign has influence and/or by applying auto-association rules.

Let’s break this down a bit.

Setting up time frame limits for Campaign Influence in Salesforce allows you to specify the maximum number of days that a campaign is considered to be influential. This is determined by comparing the date that a contact was first associated with the campaign and the date that the opportunity was created. The general rule of thumb is to use two-to-three times your sales cycle to set these limits.

Let’s see this in action.

If your Campaign Influence Time Frame is not defined, all campaigns will be included in your campaign influence reports. Yep – All campaigns.  If a contact was associated with a campaign 5 years ago, another last week, and then had an opportunity created, the credit would be equally divided between both campaigns. It seems hardly fair that the old campaign is receiving equal credit for the efforts of your hard-working, new campaign!

If your settings look like the image below, in other words, and your Campaign Influence Time Frame is blank, then this is exactly what’s happening. 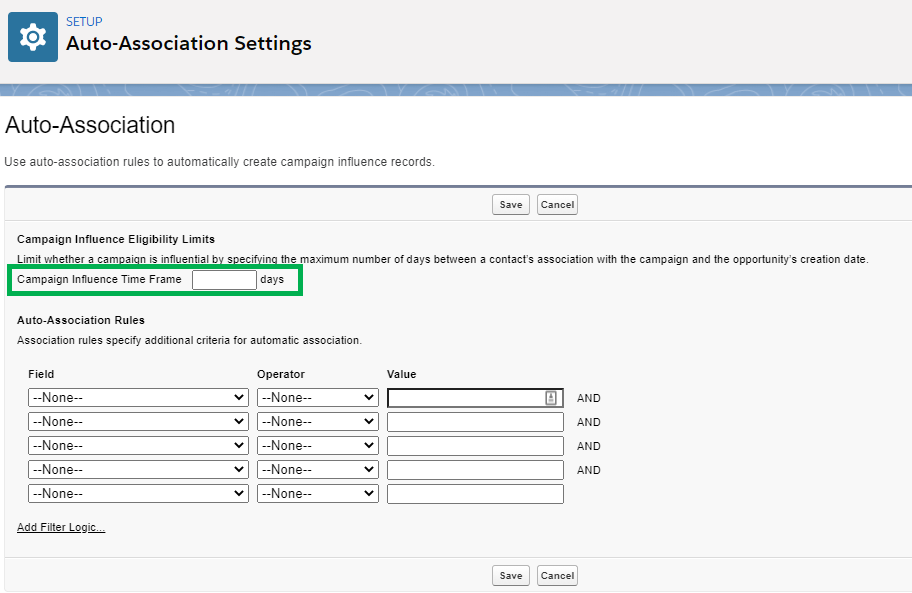 Let’s look at that same scenario – with one small change.

If your Campaign Influence Time Frame is set to 60 days, only campaigns with opportunities created within this 60-day window will be included in your campaign influence reports. If a contact was associated with a campaign 5 years ago, another last week, and then had an opportunity created, the last campaign would receive 100% of the credit. The old campaign would not receive any credit because the time between campaign association and opportunity creation is greater than the 60 day limit. Now that’s more like it!

Here’s an example of how a 60 day campaign influence time frame looks in Salesforce setup. 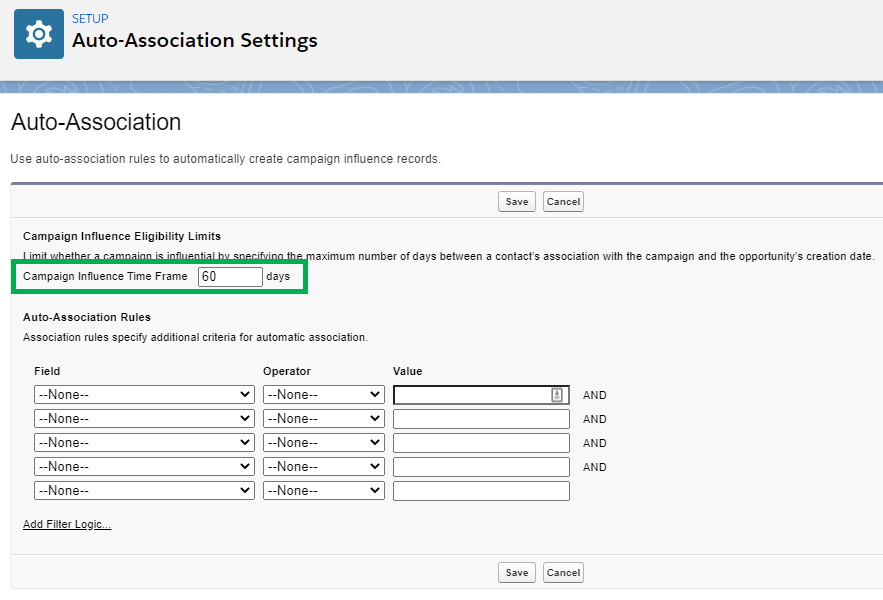 Now that we’ve covered Campaign Influence Time Frame, you may be wondering, what’s the deal with auto-association rules?

Setting auto-association rules in Salesforce allows you to apply criteria to limit campaigns that are considered to be influential. They are not required, but are highly recommended.

You have an Engagement Studio Program set up in Pardot with the action to add all prospects to your “Follow-up” Salesforce campaign with the campaign member status of Sent and another action to update the status to Clicked (if an email was clicked). One of the members of this campaign also attended a webinar three weeks ago and is also included in your “Webinars” campaign with a campaign member status of attended. How would you apply campaign influence if a new opportunity was created and…

In my eyes, the act of being sent an email should have zero impact on campaign influence and should not be considered in your influence reports. However, the story changes if that email is clicked. This is where auto-association rules come into play.

The rule below ensures that only the Click campaign member status is included in your campaign influence association reports and excludes the Sent status. Pretty cool! 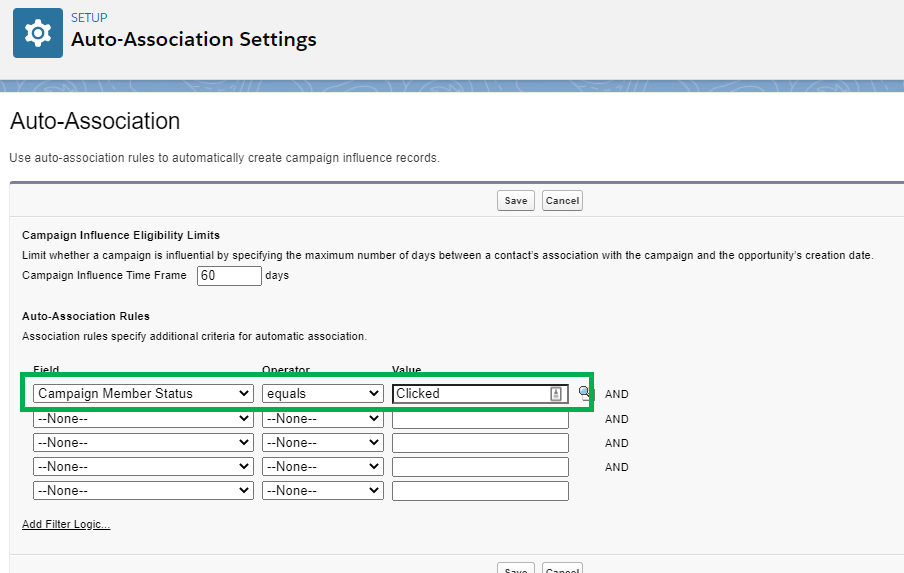 You can accomplish the same thing by creating a rule that looks for Responded status equals True (or combining both with an OR statement). 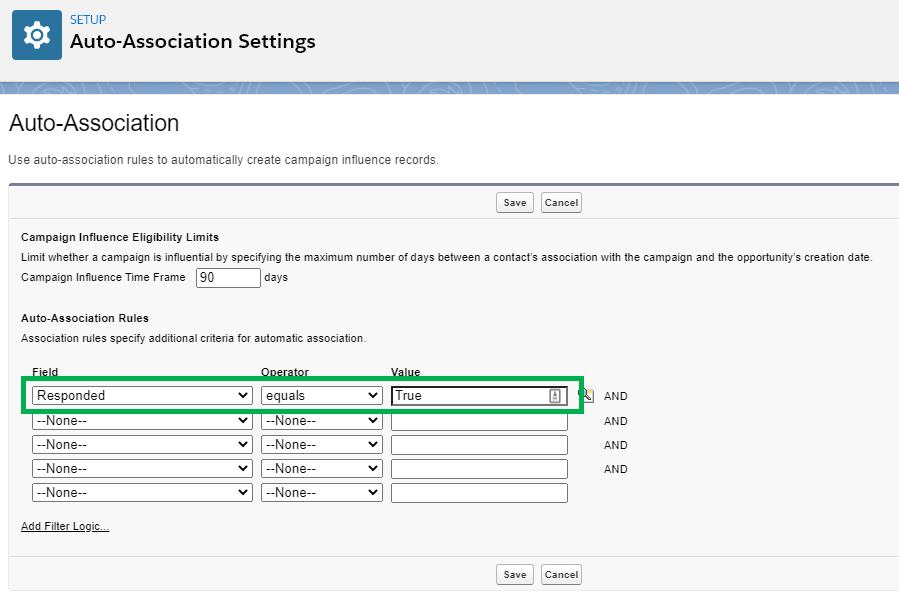 Keep in mind, this rule is looking at the Responded designation only, not the Member Status. If you go this route, you need to ensure that all your campaigns have Responded selected for at least one member status. If you don’t, that campaign will not be included in your campaign influence reports.

Use Salesforce Know-How to Step Up Your Marketing

Auto-association is just one aspect of Salesforce that can seriously impact marketing. As Salesforce and Pardot continue to move closer to a single platform, Salesforce knowledge is becoming a requirement for successful digital marketers and Pardot Admins.

Sound intimidating? Fear not – we’ve got you covered with our new Salesforce Basics for Pardot Admins training course. Check it out to learn more tips to improve your digital marketing effectiveness by working smarter in Salesforce.